Pear Bio and the Ever-expanding World of Tailored Oncology

In a world reliant upon standard patient care within oncology, Pear Bio looks to reform how pharmaceutical companies trial new drugs in addition to how doctors treat patients. This upheaval of the treatment status quo aims to evaluate patients as individuals and remove the current ‘one for all’ standard of treatments that are applied within the sector. The team has developed a method by which they can recreate the cancerous environments of the human body on a single chip tailored to an individual which allows for the trial of multiple treatments at once. This application of the ‘Organ-on-a-chip’ technology provides a decisive and optimised approach to precision medicine that stands at the forefront of modern innovation.

The ‘Organ-on-a-chip’ technology allows for bespoke treatment trials to occur and consists of 3 highly specific techniques. The first includes the biomaterial development alongside tissue engineering to provide 6 environments that will contain samples of a patient’s tumour. The second step relies upon the ‘Organ-on-a-chip’ compartments embedded within the chip which house the engineered tissues containing the cultured cancer cells which act as their own individual environments. These individual environments allow for the measuring of metastasis and drug dosing/clearing using a computer vision algorithm developed by Pear Bio that generates a cancer spread map. This identifies the spread of cancer cells over time within the engineered environments once they are subjected to various treatments.

All 3 steps of this innovative process can occur within one device that combines the specially engineered tissue, biomaterials, and micro fluids with various drug treatments and analyses. Multiple FDA-approved drugs or experimental drugs an be trialled over a period to evaluate the effectiveness of a drug/ combination of drugs on an individual patient. Drug trials are made even more effective with this technology due to the 6 environments held within the chip. Multiple treatments can run simultaneously and the efficacy of each of the treatments can then be evaluated based on the spread of the cancerous cells within the device and the number of viable cancer cells detected by the algorithm. In order to visualise how treatments have affected cell viability a 3D spread map is generated for each drug combination that depicts dead cancer cells in red vs live cells in green. Identification of the number of dead cancer cells as well as the extent and speed of the spread ill allow ineffective treatments to be eliminated from trial/treatment to further narrow the pool of possible treatments. 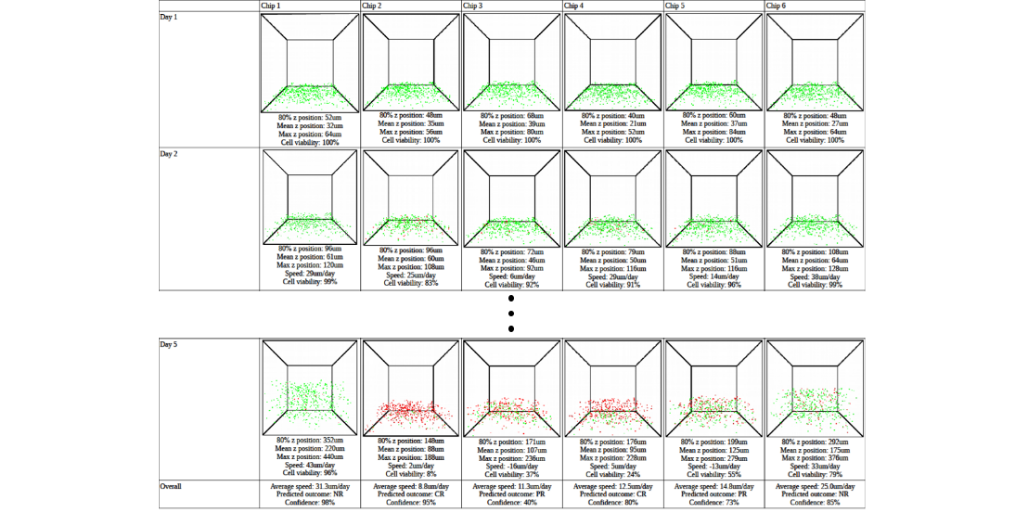 This technology provides new powers to both pharmaceutical companies and oncologists alike to contribute a wealth of improvements to current methods. A major advancement made by Pear Bio is the ability of their algorithm to predict a patient’s response to a drug/combo based on the results achieved from previous patients. The algorithm allows the user to extract multiple endpoint such as cell viability and speed of cancer spread and weigh them to score the likelihood of a patient’s response. Furthermore, the tumour environments are manufactured at an extremely consistent level which can negate any differences between animal models that would have previously been unaccounted for in standard drug trials. Not only can translational, Phase 0 and Phase 1 trials benefit from this advancement in technology, but a patient benefit is also established. Patients will be able to receive an effective treatment plan which will help to achieve a more optimistic outcome when undergoing chemotherapy. In addition, doctors can trial patient tumour samples on multiple FDA-approved drug regimens within the ‘‘Organ-on-a-chip’. Therefore, multiple trials of potential treatments can occur simultaneously within the 6 environments, this dramatically improves current methods of treating patients where only one drug regime is used at a given time.

Pear Bio brings a pantheon of benefits to all areas of oncology and is a leader in the development of cancer treatment and drug trial technology. Their ‘Organ-on-a-chip’ technology brings rapid innovation to both fields by allowing for precise drug trials on patient samples as well as regime screening for patients looking to undergo treatment. These advancements display great potential for both pharmaceutical companies and patients alike to not only improve how drugs are tested but how patients can be treated in the ever-expanding world of oncology.